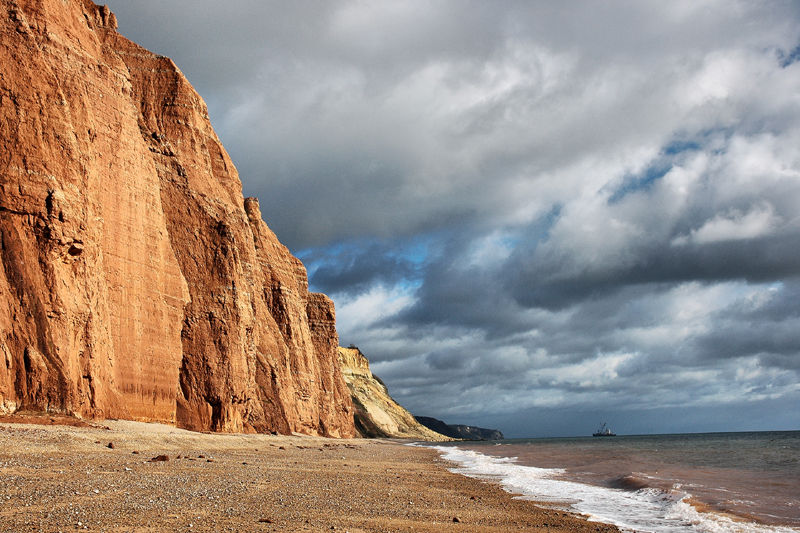 Posted by grouser (Ludlow, United Kingdom) on 18 October 2008 in Landscape & Rural and Portfolio.

This is taken on the beach just outside Sidmouth, looking east towards Branscombe. The blob that can be seen on the sea is the back half of the 'Napoli'. This is the container ship that ran aground here, shedding its containers, which washed up on Branscombe Beach where there was a salvage bonanza, some people wheeling off brand new BMW bikes. They cut the ship in half and the bows were towed to Belfast. The stern was too big to move and had to be cut up on site. Shortly after this picture was taken the white section that can be seen, which is the bridge superstructure, was removed.
My contact with the internet is going to be tenuous at best over the next few weeks so I may have trouble posting for a while. I'll look forward to an enormous backlog of pictures to view when I re-establish contact.

Nice shot Grouser...the tide is a great lead in line and there some good colours going on here.

balance in framing and focusing truly makes a picture great! :)

Wherever your going, or whatever doing,take care mate...Looking forward to more great shots like todays,when you return.

What a fantastic image. Breathtaking!. A fine composition and exposure.

Wonderful extremes grouser, sky, land and water. I really like how the cliff edge drops diagonally from top left, and the line continues along the waters edge, exiting the frame bottom right.

Beautiful image with the framing, sky, rocks, everything. And you stories always add so much. Very nice

wow -- this is a painting!! truly faabulous! the lighting -- the sheer cliff, the shifting clouds! amazing work Grouser!! i love this!! bravo!!

Great shot. I like the colors contrasting between stone and sky. Very nice.

Gosh I remember that so well!! It was astonishing to see people on the beach carting off loads of brand new stuff....quite odd!! Excellent image G...love the clouds and a great perspective:-))

I had not realized that hulk was still out there . . it faded from the headlines after the last BMW left, I guess.

Beautiful seaside landscape grouser. This would make a great painting.

great composition here building up from the cliff on the left - it looks really imposing! love the clouds as well - superbly defined!

like how the slope of clift joins the wavefront to form a diagonal, similarly, the sea and land.. interesting.