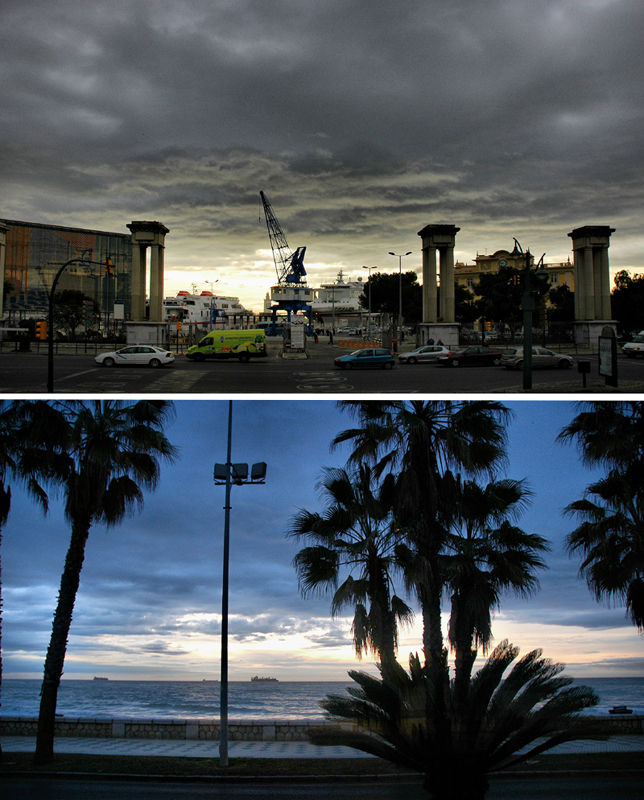 Posted by grouser (Ludlow, United Kingdom) on 17 February 2009 in Cityscape & Urban and Portfolio.

We took the bus from Comares to Malaga. The bus (a full size one) departed in the dark at 7 am. The route takes you from Comares at 725 metres down and then up on to Mount Santo Pitar, contouring round its side at over 1,000 metres up before winding down the hillside to just about sea level at Malaga. The road is scarcely two cars wide and less in some places and twists and turns like a switchback to make its way down. As the journey progressed the bus gradually filled with women on their way down to work on the coast. Slowly a gleam appeared on the sea below gradually intensifying as we descended until as we entered Malaga dawn appeared. These two shots are taken through the bus window. The top one shows the entrance to Malaga Port and the bottom one the sea front that precedes it.

Good combination of the two "malagueñan" images. I lie the first one showing a part of the commercial port.

You could have one without the other here but.. it would be a pity ! ;/

EYES WIDE SHUT from The library of my soul, United Kingdom

Neat shots Grouser, and I loved your commentary with this post.

Beautifully captured - but just how wet did you get on this trip? There are lots of ominous clouds that constantly make their presence felt.

@dobbino: Lots of clouds but only one days serious rain. Considerately it mostly rained at night and the land does need it.

The combination of the view works well

Super little narrative to accompany the images . . can feel the excitement of the journey.

beautiful shots, considering they were taken from the bus.
i particularly like the sky in the city photo.

Wonderful shots, Grouser!.. full of energy, both natural and man-made. Thanks for sharing them and your narrative.

this duo fits like a dream, work time, down time, I love this combo :)

I love the sun rise overlooking the ocean! beautiful framing and the collage is great! :)