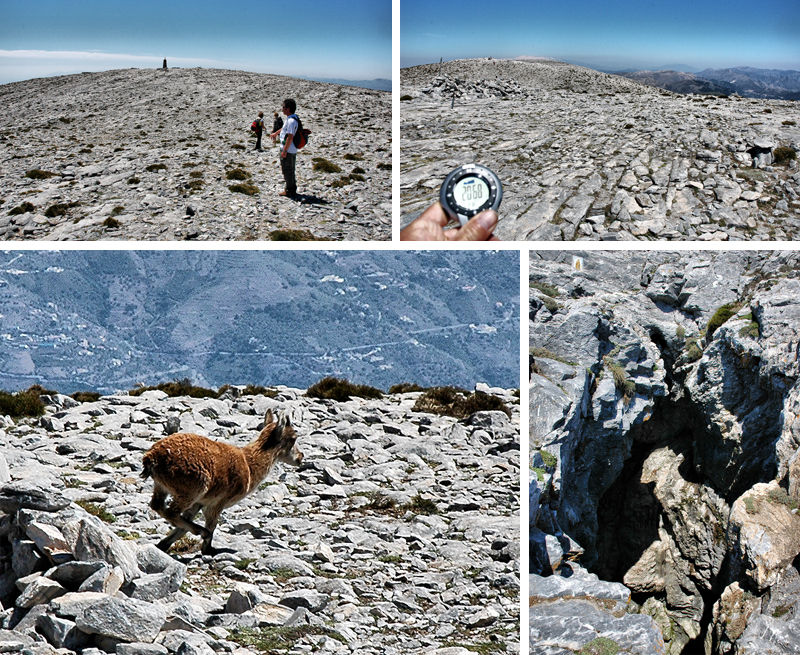 Posted by grouser (Ludlow, United Kingdom) on 6 June 2009 in Landscape & Rural and Portfolio.

The summit at last. Top left shows the final approach. Top right, the top with altimeter to prove it. Bottom left a young deer runs for its mum. They were loitering just below the summit for some reason best known to themselves. Bottom right is a sink-hole near the summit. These were formed by soft faults in the limestone being dissolved by rainfall. There are several and this one is the deepest, 45 metres straight down. They add an extra frisson of danger to this climb particularly in snow or cloudy conditions and have claimed lives. Difficult to photograph well without being roped up. The small plaque in the top left of the picture is the Virgin Mary.

Cool Collage! Shows a very special playe in the world i think.

It's been a long climb. But it has paid off. You're on top. Great series. And I do not know why my archives come up on my link.

@Lee: Perhaps you have accidentally changed a setting Lee. It didn't used to happen.

great collage and pictures! Thanks for sharing this very fascinating area with us. :)

Fine pictures documenting this successful climb. Those fissures must be an awesome thing to look down!
I'm surprised the deer would be up here where the food is not! :-) I enjoyed the shots very much.

@Don: There are both deer and mountain goats (Ibex) on the mountain. I have only ever seen the deer high up while the goats stick down by the tree line.

What a lovely story you tell with these photos :)

very beautiful collage. the place is also interesting and the details you show. well done

Well done, worth all the effort. nice one

Cool. I like the montage, Grousie. The combination tells a nice little story.

Great series of mountain shots. Looks like an awesome location - so barren but the impression of space, distance and altitude is very apparent.

Wonderfully done, Grouser. Thanks for sharing this trip - I must say I am envious!

Such exciting shots and artfully arranged . . I am out of breath already !