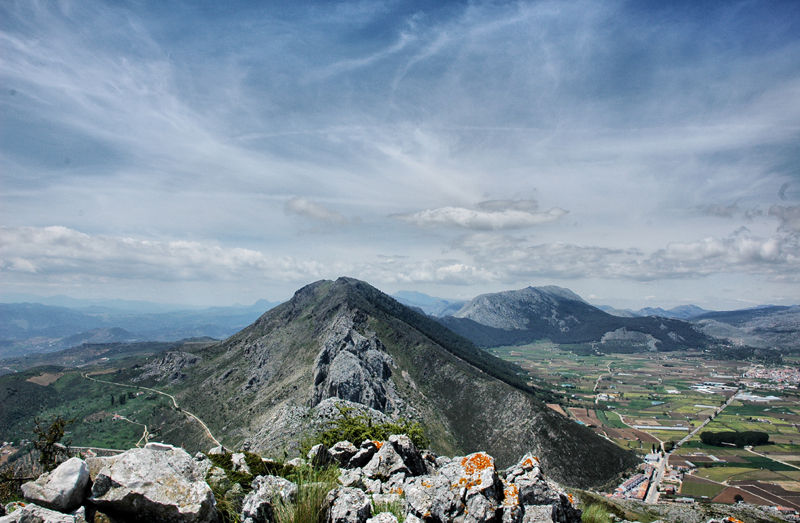 Posted by grouser (Ludlow, United Kingdom) on 22 May 2010 in Landscape & Rural and Portfolio.

This is taken from the summit of Pico del Puerto on the ridge dividing Granada from Malaga province. On the left (Malaga) a valley descends to the coast, while on the right (Granada) the mountains have dammed the silt creating a fertile high altitude plain which is intensively farmed. Straight ahead, but hidden by the crags, is the Zafarraya pass and the road connecting the two provinces. When crossing the pass we had noticed an inviting path leading up into the mountain and finally succumbed to the temptation to follow it. It wound up the hillside for a bit before petering out in a series of goat trails, forcing us to yomp the rest of the way to the top. However it made a nice circuit, climbing up on the Malaga side and descending on the Granada side where we had a well earned beer.

Very good and luminous shot, I like the panoramic that shows mountains and valley.

One of those landscapes that asks to be read like a book . . certainly one to linger over.

me loves.. I want to stand there :D

A very beautiful point of view. Lot of depth in this shot.

I like these mossed stones on the foreground and the great depth in this landscape,the blueish
mountains..and the clearness!! (cheers:))

"A woman lying on a rug in warm colors"... Excellent composition grouser with a light and textures that invite you to dream. How much beauty in nature and good places to find your image frozen in eternal, friend grouser! Best regards, Adela

i love this majestic view. thanks for sharing

Your hike gave you a fine opportunity to get some good shots. I like this one today that shows by sides of the pass so well. I'm glad you make the intense effort to get to the top. Fine shot.

Good evening Grouse,
the view is fantastic and the explanatory words very informative. I think you've earned your beer and that it will taste good. Have a nice weekend. Dear greetings Christel

Stunning, what a view

This shot is a treasure...just takes my imagination away into another world.
Thanks for taking those paths 'less traveled' so we would have an image of it!

WOW! What an amazingly beautiful shot. Such a wonderful view. Great tones and composition.
5 stars

sensational landscape! excellent composition with an interesting foreground and i like how the view opens up behind...

What a mountain!
Too cloudy.
Well done.

Superb is your light running over here !

WoW!! great man!!
Did u try a HDR here?
I think it look like. Nice combination.

Beautiful mountain shots, as usual with you! I remember going up and down the road from the coast through Suspiro del Moro pass with the almond trees in bloom. It was quite sight! Gosh, thirty years ago already....

Very beautiful landscape and what a treatment!