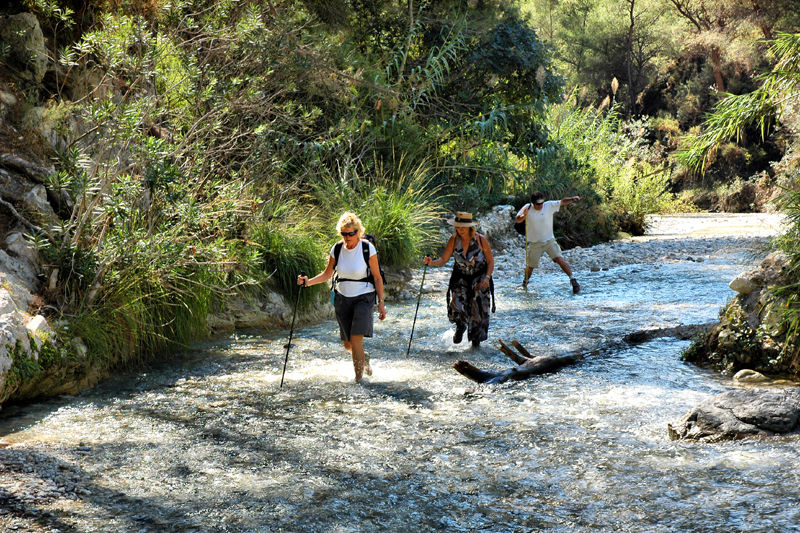 Chiller in the Chillar

Posted by grouser (Ludlow, United Kingdom) on 14 October 2010 in People & Portrait and Portfolio.

Rio Chillar Take 1. Near the start.
Despite the heat we did manage one major walk up the somewhat cooler Rio Chillar. It's a round walk going up the valley, mostly walking in the river, which despite the fact that it was autumn and hence there had been very little rain for a long time, runs fast and crystal clear. In some places the water runs through vertical canyons only a metre wide and even at this time can be over knee deep. After a beautiful but rather arduous walk wading or criss crossing from bank to bank the river intersects with a major path and climbing up out of the valley we followed an acequia (an irrigation channel feeding a hydro electric plant) that contours round the hillside giving great views of the surrounding mountainous countryside. The walk took about eight hours including an hour of lunch and rest breaks and was a top dollar day out:)

the girls are doing a great job, but the guy who is dancing in the back not so, great image

@Alun: He's doing his best not to get his feet wet:)

Really good composition and capture of the light

This first shot has me hooked already . . you make it sound so exciting from the narrative here !

Excellent composition, I love the guy at the back. Enjoyed your info, it sounds like a fun walk and you certainly captured the crystal clear water.

A very beautiful photo and great in action !

I hope this was near the end of the eight hours, I think by then the legs and the feet would need cooling off!

@Curly: No at the beginning:)

Lol on Alun! Super shot. I might have missed this previously...what country are you in?

@CElliottUK: The tags tell you all Chris:) Spain

Good morning Grouser
The information is very interesting including the view. The clear water is excellent for expression. The man looks funny, in its motion. Have a nice day and all the best. Dear greetings Christel

Superb view for this adventure...

A great explanation and very interesting man! The picture illustrates very well. Man gives me trouble from the bottom of the image that looks set to fall at any moment! Best regards, Adela

@Adela Fonts: No he was fine. Just trying to keep his feet dry:)

It looks like a very refreshing way to go for a hike !!

It looks great,and your story with it is great!
I really like this view,struggling through the water..in the heat..
stilll optimistic! Beautiful!

Wonderful shot and write up sounds like a real adventure, looking forward to more shots of this adventure

Superb shot!
nice composition and lighting...interesting writeup...
looks like the man at the back needs help

You'll end up getting reumatism :0 but it looks and sounds really exciting.

Fascinating shot and story,but how the hell can you keep your feet dry if your walking in a river without wellies.??. ;>)

@Jeff: With difficulty hence the acrobatics:) He changed into sandals later.

The MaJor from TM HooD, Iran

Glad to hear it friend ... was making me suffer! Happy break! Adela

eight hours?! wow! That's a long walk - and sounds like it was wonderful! Love the shot. The "miss the water" action is so funny and the girls look very involved!

Funny. Looks hard to navigate the water, there. Great shot and great walking along with you.