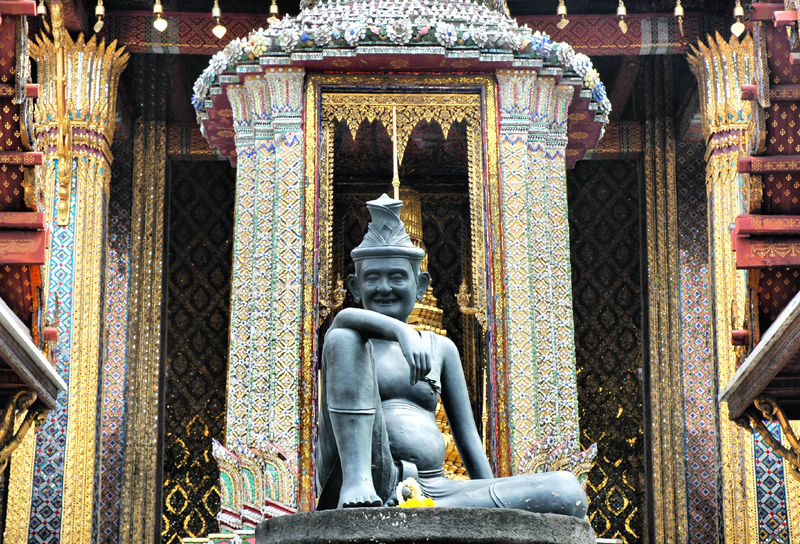 Posted by grouser (Ludlow, United Kingdom) on 2 December 2010 in Art & Design and Portfolio.

Behind this languid smiling man are the mosaic covered walls of the Temple of the Emerald Buddha. The row of bells at the top of the picture tinkle in the light breeze. The Emerald Buddha was originally in Chang Rai and then Chang Mai in northern Thailand. It was captured by Laotian invaders and taken to Vientianne in the sixteenth century only to be recaptured and taken to Bangkok two hundred years later. It wears three different robes that are changed by the king, one for each season, rainy, hot and cool. When we were there it was about to be changed from rainy to cool. Just 30 degrees C and humid. The Buddha is not actually emerald but a large chunk of jade. Photography is not permitted inside the sanctuary where the Buddha lives so this is as close as we get photo wise. If you want to see him you have to go there :)

Wow, fantastic shot. The colors and composition and all the details are amazing.

Back from my trip! Thanks for your comments!

A lot of bright light bouncing around there, the mosaic and other decorations must be quite a sight to see.

an amzing amount of work has gone into that temple,nice capture..

How amazing and impressive! The sculpture,the mozaic work,the colors..all wonderful,
and beautiful captured!

The face here looks like you could have seen in the crowd around you . . how odd it looks on that statue.

Realistically creepy man sitting up there, otherwise a beautiful spot.

Thanks for your explanation friend. Very interesting! I love the image of the sculptural character, seems happy and smiling! Best regards, Adela

Good evening Grouser,
It looks wonderful. The fantastic colors including the general view are unique and are excellent for expression. I think that the internal view is beautiful. Have a nice evening and all the best.
Dear greetings Christel

Yes his smile is infectious ;)