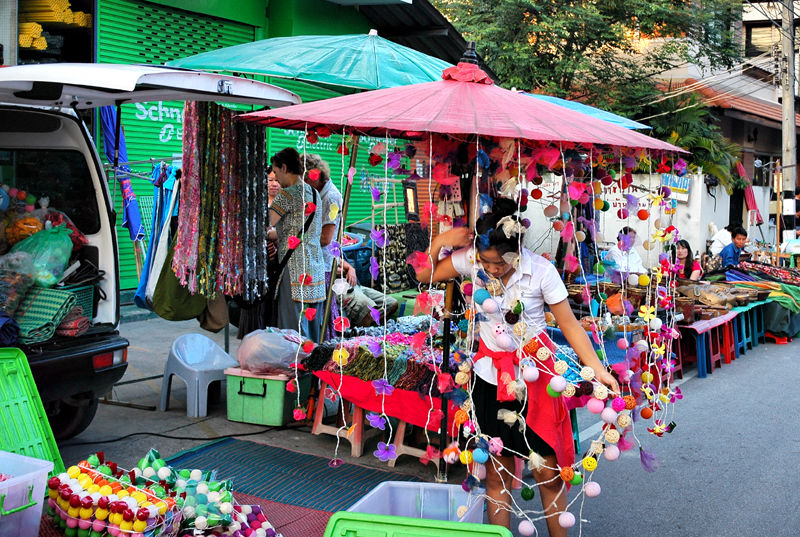 Posted by grouser (Ludlow, United Kingdom) on 11 December 2010 in Lifestyle & Culture and Portfolio.

Early evening at the night market, untangling the lights for display. Just after I took this shot we sat down at a restaurant for a well earned beer. Suddenly music blasted out from loudspeakers and everyone except us stood up.The waiter came over and begged us to stand for the King, as it was the national anthem playing. We duly complied feeling rather foolish. Afterwards we got into a long conversation about it with a Thai couple who were insistent that we stood up for the Queen all the time in England. "Not for years". "Oh that must be because of Lady Di." "No, way before then." They were not convinced.
The king is loved in Thailand and we came across another curious custom earlier in Bangkok. We noticed that a large number of people were wearing pink shirts or blouses. It turned out that the King was sick and at his last public appearance he had worn a pink shirt. Hence pink showed solidarity and the wish that he would get well. Fortunately he did :)

Oh the colors are so vibrant! Beautiful image!

Great colours and compo. Interesting story, you are right standing for the national anthem left after Alf Garnett left our small screens-how long ago was that!?

Another remarkable shot,and story!
I admire the women with all these wires with things..place them on that big umbrella!
(think I would go nuts,untire them:))

A very interesting street scene of the vendors setting up. The account of the music and the local culture I found very interesting too. People (and me) seem to cling to our preconceived ideas about a number of issues in life! :-)

It seems that the girl emerges from the box full of colored balls with lights. Excellent composition my friend! Interesting explanation! Best regards, Adela

What a surprising meeting !

...and now we beat our royals with sticks. How sick has our society become?

When in Rome etc.

Of course standing to attention when covered in wires and light bulbs cannot be easy.