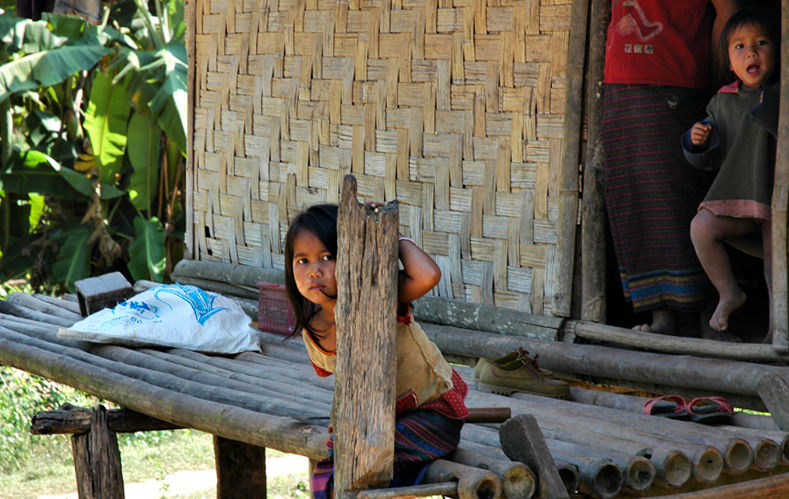 Posted by grouser (Ludlow, United Kingdom) on 21 December 2010 in People & Portrait and Portfolio.

More children from the Mien Village.
The people of Laos amazed us with their laid back, welcoming, hassle free friendliness. This is all the more extraordinary given their relatively recent history. The US initiated an undeclared and therefore illegal war in Laos in 1964 which continued until 1973. B52's bombed the country at the rate of one plane load every eight minutes for twenty four hours a day. They dropped 260 million bombs, amounting to half a ton of explosives for every man, woman and child in the country. More ordnance was dropped here than was used during the entire Second World War. This gives this poor country the doubtful distinction of being the most heavily bombed country in world history. Much of the munitions dropped included cluster bombs, many of which failed to explode on impact. These still reap their deadly harvest today. Indeed while we were there a young girl, probably not unlike this sweetie in the photograph, found one and tossed it in the air. It killed her and seriously maimed her playmate.

Beautiful capture of a precious one, sad so many like her die and are crippled by the devious devices of men and their war machines

The text you type ... a wonderful story friend! The time has frozen for your photo is immensely tender and beautiful. Finally where there are children there is humor and fantasy! Babydolls and tenderness!
Thanks friend for this gift today! The text you type ... Best regards, Adela

Superb shot! Love the look on the girls face in the doorway

Beautiful photo, full of hope, I like this very much Grouesr :)

it is definitely a very sad history i am afraid to say. i love this portrait, shy and tender.

A cute shot of this youngster with the inquisitive look on her face. Well done.

Has warfare ever improved the human condition? Sadly it has not.
Great picture of unspoilt innocence Grouser, hope their lives are long and fulfilled.

sweet photo but chilling back story.

Great sensation with this socio-political paralelism... The two looks stared on something sorprising and your words; the two forms of expression are like a sort of question: where is the sense (sentido in spanish is direction and sense). I love this one: lots of tension !

Very cute moment caught! They're right to be just a little wary.

Yes, all the things we knew about, saw on the news, protested about in our youth have such poignant meaning when you actually get to SE Asia. That's why the 'guilt movies' don't cut it, eh?