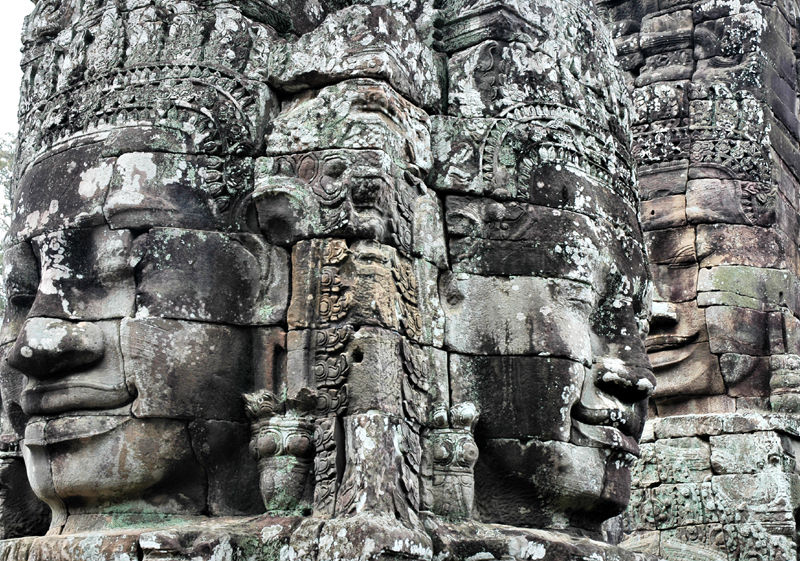 Posted by grouser (Ludlow, United Kingdom) on 7 March 2011 in Art & Design and Portfolio.

Built by the great Kmer King Jayavarman VIII these huge faces of Avalokiteshivara, perhaps also portraits of the King himself, dominate the surrounding landscape. The temple was built in the twelfth century.
I am back somewhat sooner than I expected having spent a week in hospital instead of the two and a half weeks of wild orchid hunting planned in Spain. The best laid plans....still I guess you gotta roll with the punches :)

Are you OK? I'm sure that a week in hospital wasn't mentioned on the travel brochure!

@CElliottUK: Weak, but alive thanks, and that's the main thing :)

Good to know you are out of hospital - hope everything gets back on track. Amazing textures we see on these stone portraits!

Hope you are well, and not feeling as green as these old stones!

Super texture in these statues ;)
Think about your plan again ; it sounds great :)))

Great detail and age showing on these pieces. Sorry to hear about the hospital detour.

I love these faces. A wide smile on the relief and great textures well seen by the photographer! Best regards, Adela

Beautiful,beautiful shot!
Great to see you back! :)

I'm glad your back...and hopefully restored to normal. A fine shot with excellent detail and color. What a massive object to shoot.

Sorry to hear you've been baad under the doctor butt,not surprising though, considering the hard faced sorts you've been mixing with.

All the best mate,hope your on the mend !!
Great textures in this shot and so much detail !!

who needs wild orchids when there's hospital food and all manner of contractable diseases to be had!
Get well soon fella!

Whatever it was/is I hope you are over it now bud. I can just imagine these huge stones revolving and grinding open to reveal a secret passage. Brilliant shot.

WOW! This is excellent! Wonderful detail and textures. At first I thought it's more than one photograph in one
Hope you are feeling better!