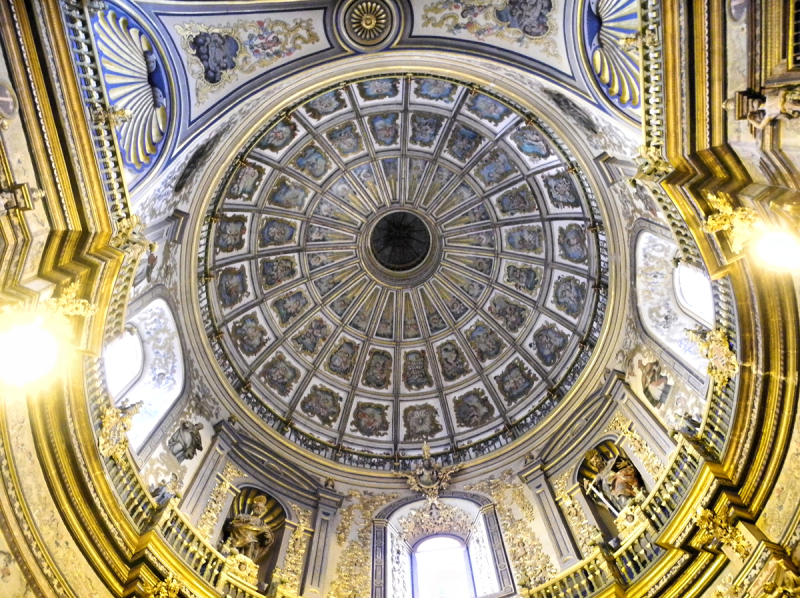 The dome of the Capilla del Salvadore in Ubeda, where we arrive after a lovely drive through mountainous country, and a delicious lunch. There is some sort of bird on the menu which the waiter describes by flapping his arms, as neither of us know the word he is using. I take a gamble and it turns out to be quite small but very tasty, We establish later that it was a quail, a bird I have never eaten before, though I've had their eggs

Lovely dome, it would have been a first for me to eat quail, but I admire your sense of adventure

So majestic,
So beautiful details, colors,

Haha! I can imagine the mime now! Isn't it great to experiment with food, never quite knowing what's what is half of the fun!. Onto the shot, damn this is an impressive place!

Cool shot of this bright dome.

What an adventure you are having, I love this shot is so beautiful.

Love the pov, the patterns and shapes.

Absolutely beautiful! Gorgeous colors. I loved how you described the bird you had for lunch. Very funny! Made me laugh!

A fabulous bright and beautiful shot.

Must have been darker than this picture looks judging by the high iso and slower shutter. You made the best of it. despite the strong light through the windows.
I think I'm the same way when I'm abroad, I'm quite happy to taste any new foods that I haven't tried before.

stunning view into the dome, stunning colours, too ...
(i hope you weren't left hungry after the quail ... ;-)