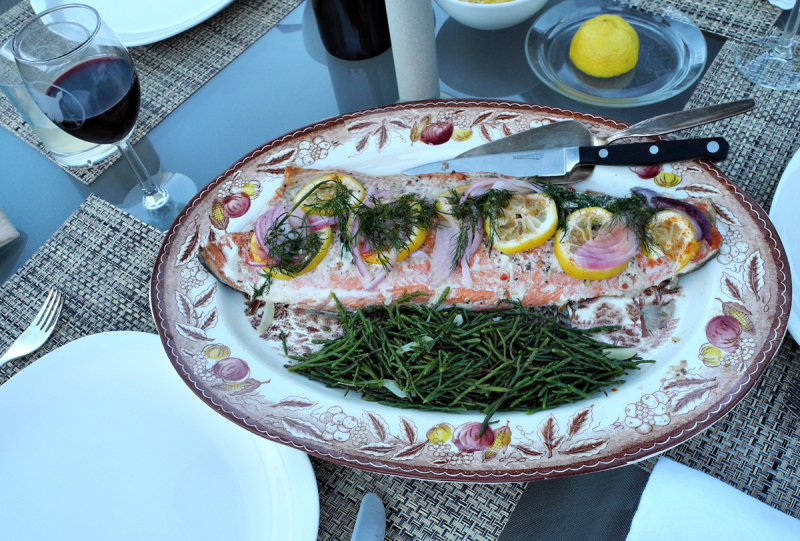 A slice of Salmon (Sockeye if I remember correctly) accompanied by samphire. We came across the samphire (also known as Sea Asparagus) growing on the shore by the dock. I recognised its shape but felt the need for confirmation, This was difficult as most locals don't seem to bother with it, but using the internet we got enough corroboration to take the risk. I later came across reference to it in the book I was reading' Passage to Juneau, a sea and its meaning' by Jonathan Raban. Captain Vancouver was well aware of its properties and fed it to his men to stave off scurvy.

No worries about scurvy, then . . that must be a relief. Must say this looks excellent.

Looks like a lovely dish, that samphire has the look of dill, I wonder what it tastes like?

@Curly: Not a lot of taste to it, (subtle is the word I think:) but it has a nice crunchiness and adds saltiness naturally to the dish. We get it in the UK. It grows on various parts of the coast

Excellent text information ... Thanks Grouser! very interesting. And a sockeye appetizing! ... Bon appetit ... although not if it is a small amount for many diners as we visited the picture!

@Adela Fonts: Enough for four. There are more food items out of shot :)

gerard1948 from Somewhere on earth, Spain

Very beautiful composition, with a plate that makes you want to eat, the fish and accompaniment look excellent. A very nice picture and thank you for the information.
Have a good Sunday.

A delicious looking meal - and image!

Mmmm, that looks yummy, we pick samphire up here on the Wirral. There's loads of it. I can't believe how much it costs in the shops.

It looks really good! I love salmon! I have never heard of sea asparagus before. I always like trying new things.

I tried Samphire for the first time about 2 months ago-I really like it, and with the subtlety of the salmon, I bet the combo was great

Well photographed, and I admire your bravery in foraging wild greenery. As a city boy, I have to let someone tell me what's safe to eat.

Thanks for posting this. I enjoy food shots, and very interesting about the veggies. That is very brave. I know people who teach edible strolls through nature. We must swing back.