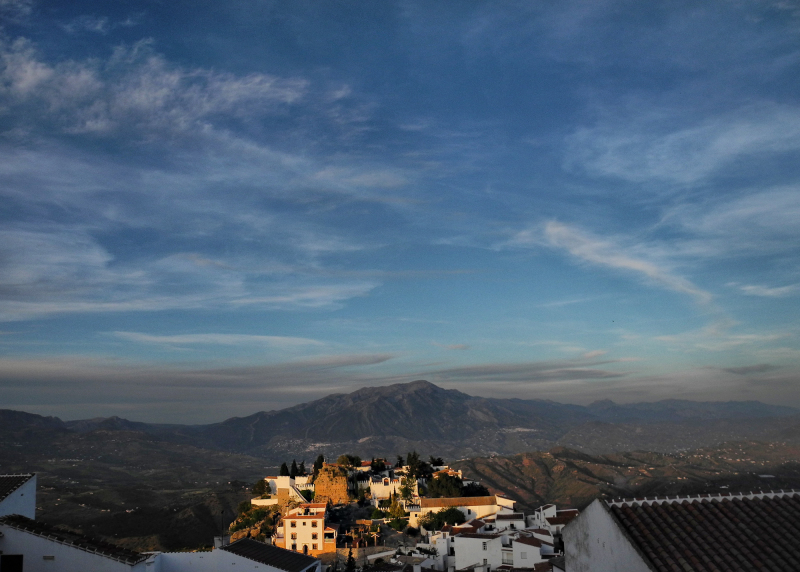 and so to April where we return to Comares to sell our little village house. We have given ourselves nearly three weeks there with the intention of saying a leisurely goodbye and sorting out the things we need to keep. Instead we stumble into a Kafkaesque nightmare. To cut a long story short, despite being registered with the land registry, the goalposts have been moved and our deeds are no longer valid. We must get a new set made and notarised together with an architect survey and our neighbours agreement at the notary on our boundaries. We are required to pay for all this plus various taxes including an imputed new build tax as the measurements don't quite tie in with the ones in the old deeds. This despite the fact that nothing has changed since we bought it, We end up spending much of our goodbye time in various government offices shelling out quantities of euros on spurious bureaucracy and feeling stressed to the eyeballs. Finally to our huge relief the house is sold, making all the paperwork we have had done at great expense largely irrelevant as a new set is made for the new owners. Things are not quite done and dusted even now as various fees are still being negotiated.

Oh.....what a terrible misery/a nasty breakdown
Terrible to end like this.
But the house is now sold......poeh !!!

Gosh ! You have gone threw a lot !!! My heart goes out for you and Mrs G..
Anyway, things have settled down and you have finally sold the house !
May you find only peace and happiness after this:)

The image is beautiful...this village nestling in the valley below these hills...a beautiful spot

What a nightmare!!
At least you came away with some good pictures.

@Curly: Don't jump the gun, you have only seen this one so far :)

How very frustration this must have been for you. How sad that your goodbye was spoiled. This is a beautiful shot with wonderful light.

I can hear your frustration. I hope you have enough wonderful memories there that the frustration will soon go away. This is a lovely long view

Wow..What a story ..but now it is sold and you post a superb photo !

beautiful sky and interestingly lit village. I am wanting to ee more of that wall that forms the foreground.

A beautiful view but a very nightmarish story. What a mess and huge frustration. I hope that you do have some good memories from your stay in the house and that this doesn't spoil it all even though it might have tainted things a bit.